A message from the editor
When Miister X sent me the copy for the second part of what we had promised the readers would be an epic tale of adventure in a foreign land, I had some concerns. There was only one day left in the story, and I was worried that having learnt the secret to enormous wealth (back breaking manual labour as it turned out, who'd have guessed) that it seemed unlikely that anything tense or exciting could happen during that time. I received the copy for the final part a few days ago and found my fears realised. I'll give you the abridged version of what happens: our now very wealthy hero buys some nice clothes, gives a speech and goes to a nightclub. That's it. I called him and attempted to explain how this might be an issue but this proved pointless. At one point, in an attempt to explain the problem I mentioned the notion of a three act structure, which he saw as a reason to segway into talking about when he used to perform three stand-up comedy gigs a night.
Several hours later I managed to steer the conversation back on track but when I tried to be tough and say that he'd have to rewrite the previous entries so that the finale could have some kind of climax, he giggled, then in a serious tone explained that he wasn't contracted to do re-writes of any kind. He also explained how he had long since lost interest in the project because the whole concept was as he put it "lame as hell".
On that it was hard to disagree.
So without further ado I give you the concluding part to the trilogy. When we last left our hero he was fabulously wealthy, despite what his attire might suggest. 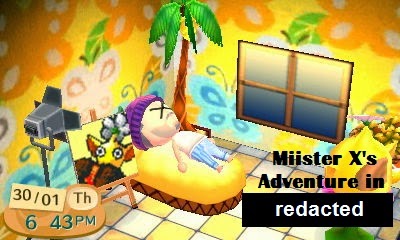 As I awoke, I felt happier than I'd felt since I got here, knowing that my time in this town was almost up. It might also have had something to do with the bright summer colors of the room, they were just so positive! I made a mental note to have at least one room in my house decorated with this "carrot monster" theme when I got home.
I occurred to me that my one day of labor may well have made me the richest man in town, but that money would be of little use to me in the outside world. I had taken lots of money out of the town, and who knows if this bunch of idiots could deal with a sudden dependence on importing. Clearly, there was one decent, honorable thing to do....

This spree didn't exactly last long, the town only has four places to buy things and I wound up buying an awful lot of horrible wallpapers, carpets and museum fixtures but I like to think I shared the wealth.

I knew the villagers didn't recognize me, and probably wouldn't be that enthusiastic if that unshaven, sweaty homeless guy who'd spent the previous day shaking down trees tried to open the lighthouse so I stopped by the beauty parlor to get cleaned up, and managed to perfectly describe, from memory, the dimensions and design of my favorite suit to a local tailor.

Two things caught me by surprise when I arrived to give my speech.
1: That a few people had actually shown up
2: That the lighthouse was there at all, because I swear to myself it was a construction site eight hours ago

I had taken the time to write my speech on a scrap of one of the carpets I bought earlier (no sense letting it go to waste). As I recall, it went something like this:
Citizens of [redacted]
When I arrived I was a success but your country ways made me feel like a failure. And yet here I am, the richest man in town, who unlike the rest of you, has the power to leave. My time here proves what I have always known, that winners always win because they're winners, and losers like you always lose. I cannot think of a better public work for this town than a lighthouse. A lighthouse stands tall giving the message, "you don't want to come here" a fitting description of this dump. NOW WHO WANTS TO PARTY IT UP WITH A WINNER?
Unsurprisingly only one (guy called Static) of these losers had the nerve to meet my challenge to party it up and to be honest, I'm not sure he heard me... you'll see.
So I partied all night long. All night long. ALL NIGHT LONG, except for when I was asleep. I wasn't keen on taking the train with a hangover but in the morning, when he woke me up, the club owner explained how I'd been drinking fruit juice all night, and that my drunkeness may have been half placebo effect and half mental fatigue. 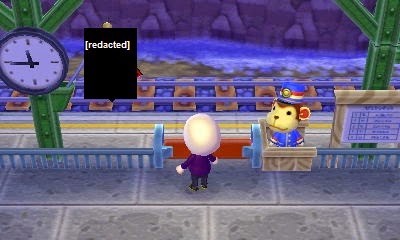 As the train sped away from New Wangsburg, I reflected on my time there. What I learned from the experience was that a winner
Wait, I said all that in the speech. Just read that again, but this time picture me on a train as you do so. I think I was drinking a latte. That's it. This is the end of the story.

See what I mean. Bought loads of stuff, makeover, speech and party. That's all. What a waste of internets.