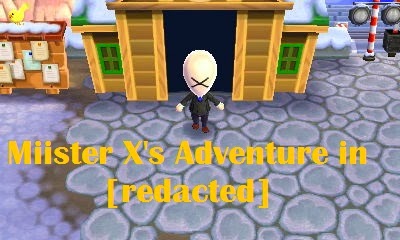 For part two click here.
Hey, it's mii, Miister X. You may remember from such roles the King, the Prince and the Princess in Streetpass quest. I don't need to tell you, I'm a pretty big name in the Miiverse. So when Ivan and the other one were putting together their plan for a games blog, they'd the right idea asking mii to be their mascot. In the negotiations they insisted I do promotional work for them and write at least one piece, because when you're both a champion tennis player and an ace pilot, people want to know what's it like in your head. That's why I wrote my book, "Miiverse-us the World". I was in a bad way financially at the time because of my skiiing injury, so I couldn't say no. I did manage to talk them into letting me do the article about the promotional junket mind. With the contract signed, the Moustache guys said they'd be in touch when they had the junket arranged. Four months later, the other one remembered that he was the mayor of a small town called [redacted] (I didn't call my town [redacted], by how I wish I did. ~Ed) which thanks to a lack of checks and balances he could pretty do what he wanted with. He arranged for mii to spend a few days there promoting the blog, culminating in a speech at the opening of the the town's lighthouse. This is that story. A story of making the best of a bad situation, of fixing problems when no one will help you and absolutely terrifying snowmen.

The other one recommended I explore the town and check out the sights on my first day there, so I had a wander around. The first thing I noticed was weeds, lots and lots of weeds.

One of the sights I'd been encouraged to check out was the local museum. This proved to be another mystery. The place had a number of extremely valuable paintings (the Mona Lisa to name but one) but clearly no security, seeing as most of the exhibits had been stripped bare. 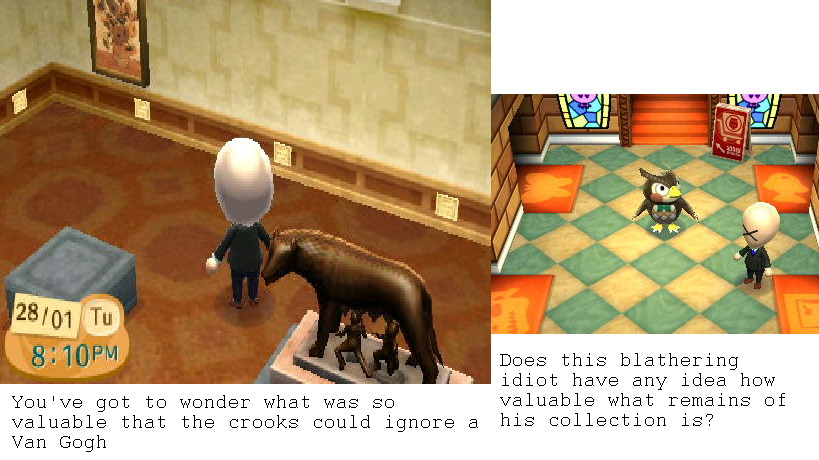 My leg had healed nicely, so for the first time in weeks I was ready to shake what my Miimaker gave me. I rolled up to club lol (or is it club 101, I couldn't tell), told them who I was and.... nothing. I was pretty mad at the Moustaches for this, how the hell am I meant to promote their duff blog if no-one in the town's heard of me. But this wouldn't be their only mistake.

Disappointed, I made my way to the other one's house where I'd be staying. At one point, a talking wolf asked me to sign a petition to ban anchovies. I tried to make a "get stuffed" "stuffed anchovies" based pun. I failed and then awkwardly continued on my way. Then I encountered this... The other one had told me that he'd hide a key under the mat. With that in mind, can you see what's wrong with this picture? Finding myself without a place to sleep, I headed straight for the mayor's office to see if the other one had made other arrangements.


The mayor's assistant seemed to have some repressed rage towards her "blow in, absentee boss" (something to do with having the same uncompleted paperwork on his desk for 6 months)which she took out on me. She told me to try the campsite and then threatened to release the hounds (her cousins). Sadly, the facilities at the camp site proved to be.... lacking


Night at the Museum

Things looked bad. It was winter time and I needed a place to sleep. As I wandered the high street looking for shelter, an idea occurred to me. The museum was open all night, and with such lax security I could probably find a quiet exhibit or store room and sleep there.

Sure enough one of the store rooms was unlocked. 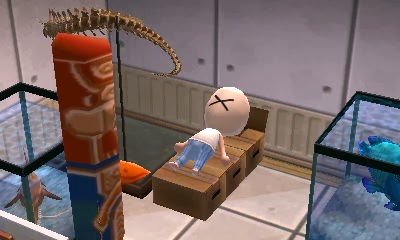 Will Miister X get a good night sleep? Will the petition to ban anchovies be a success? Will he ever forget the things he saw in Sean Connerii's attic? And what of the sinister snow gentlemen? For the answers to these and other question tune in next week whenever this blog gets updated to find out!